This house is on Block 215 (part) and was probably an original block when Kent Town was sub-divided in 1854. It has been reduced on at least three occasions. The southern point was removed to align with frontages on The Parade, probably when double tracks for electric tramcars were laid in 1908 – 1909. About sixty years later, land from the north of the house to the northern boundary was subdivided and sold for new commercial premises (perhaps Philip Morris Tobacco?). Part of the eastern boundary was re-aligned to provide access for traffic from Flinders Street and The Parade West to enter Fullarton Road. The present concrete retaining wall was built by the Highways Department during the roadwork.

Kent Town was added to the Town of Kensington and Norwood as a Ward in 1856 and the first assessment was in 1857. At this time block, Block 215 and five other allotments in Kent Town were owned by F. H. Faulding. The assessed annual value averaged £16.00 per block. The rate was then one shilling in the pound. The land remained in Faulding’s possession and was still unoccupied in 1869.

In 1889, William J Bowman, who was a pastoralist and farmer built this bluestone Victorian villa with hipped roof with central gablets and ornate front and side verandah with cast iron posts and excellent metal crested lacework. This grand house is notable for its generous scale and high quality of design and construction, as typically seen in the highly decorated front entry porch.

John Henry Weidenhofer, a German migrant came to Australia with his father in 1854. He was born in Hanover, Germany in 1849. J. H. Weidenhofer worked in an auctioneering business after leaving school and later became the manager. In 1890, he began his own business and was South Australian agent for John Lysaght, Bristol, makers of corrugated galvanised iron, for over twenty years. He was an auctioneer, licensed valuer and general commission agent. He was the eldest son of D. H. Weidenhofer who came to SA in 1854. J. H. Weidenhofer lived in the house in 1903.

The father, D H Weidenhofer was a prominent builder in Adelaide and was well known in the musical circles. He built a house for his own use in Rundle Street. He named this house Rosalie. This house was demolished in 1975.

He was followed by Dr Reginald N. C. Bickford, of the famous Bickford lime juice family. He vacated the premises in the mid 1960’s. About this time, land north of the house was sold and a stable with loft against the fence to Little Dew St was demolished.

Dr Bickford let the loft to Francis Roy Thomson, an artist from Victoria, from about 1953 until Thomson’s death in 1967. The place was then known as Victoria Kraitzer Antiques and Kent Town Galleries until Enzo’s Restaurant was opened in November 1978. The stable block has since been demolished and the grounds were reduced through sub-division and road widening.

The house was largely unaltered until work was done for Enzo’s. Enzo Clappis purchased the property for $15,000. The architects for the work were the firm of Berry, Polomka, Riches and Gilbert Pty Ltd. Enzos opened in May 1978. There was an open house to celebrate the opening from 2:30 – 6:00 PM on Sunday 7 May. A few hundred guests attended this opening.

Nick Papazahariakis took over the restaurant in 1985.He was the owner/manager and renamed it Cloe’s Restaurant. The restaurant was named after Mr Papazahariakis’s daughter. He painstakingly restored the house to the Victorian elegance of the time. The restaurant featured an elegant private dining room, the Georgian Room which seats 26 and an underground cellar housing a fine collection of 20,000 bottles of rare and vintage wines. The main dining room had seating for 50 and another smaller dining room was also available for private functions or for pre-dinner drinks. It first opened its doors in 1986. It was a five-star restaurant of unrivalled quality. It won numerous awards for its high-quality food and service.

The villa is located on the key intersection of Norwood Parade and Fullarton Road. It is in a very prominent position, and is one of the many attractive Victorian and Edwardian buildings located on or near this intersection. It is an important “gateway” entrance point to Norwood and is an important local landmark. The land is approximately 2,400 square metres on two titles. The building has approximately 790 square metres of improvements including cellars, amenities, kitchen facilities, function centre, offices, storage areas, reception and showroom areas. There are development plans for the site that include keeping the heritage building. 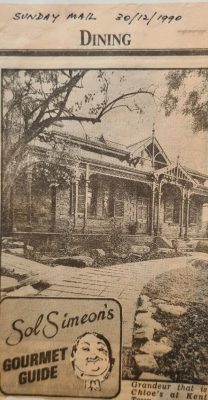 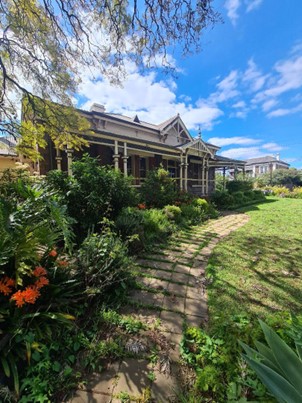 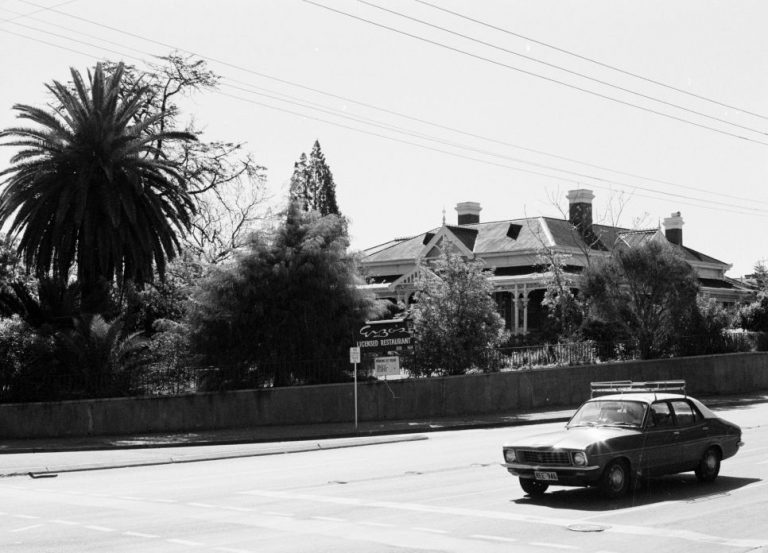